Posted at 21:51h in Uncategorized by Isabelle 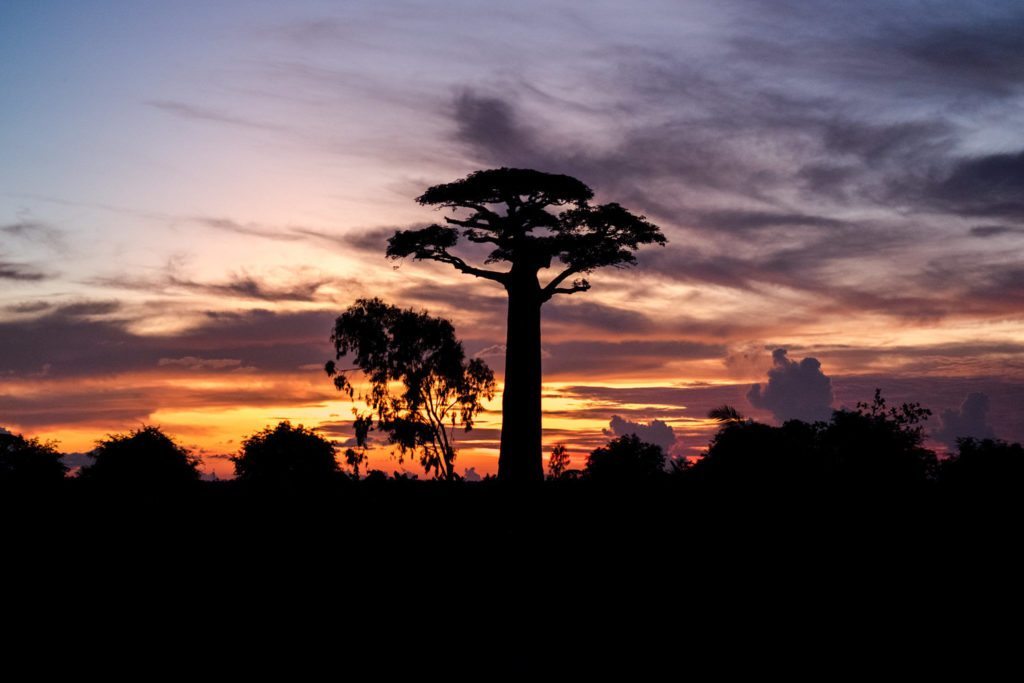 Madagascar is one of those places where you become instantly spellbound as soon as you arrive. We didn’t post any photos during our time there because we were just IN IT, absorbing the moments and flowing from experience to experience. We were blessed to find an unbelievable guide (Thanks Lanto!) who became like family and gave us intimate access to Madagascar life. Along our journey, we were told over and over “it might be hard for you to believe but-” followed by a story about the fortunetellers who guide almost every aspect of Madagascar social life, or “I know it might sound strange but-” followed by personal stories of tomb ceremonies, illuminating the age-old beliefs about the connection between the living and the dead (in Madagascar, the living are merely temporary extensions of the dead). The island landscape just adds to the magic and mysticism of the deeply entrenched traditional beliefs.

This blog post captures just a 3 days of our camping trip down the Tsiribihina river.

It’s embarrassing to admit and I’ll blame it on the sheer exhausted state we were in upon arrival in Madagascar, but the mind blowing beauty of this country literally brought us to tears. Our initial drive from Antananavario to Morandravasa we gaped out the windows like dogs thirsty for air, trying to absorb all the fairytale-like landscape and scenes around us. 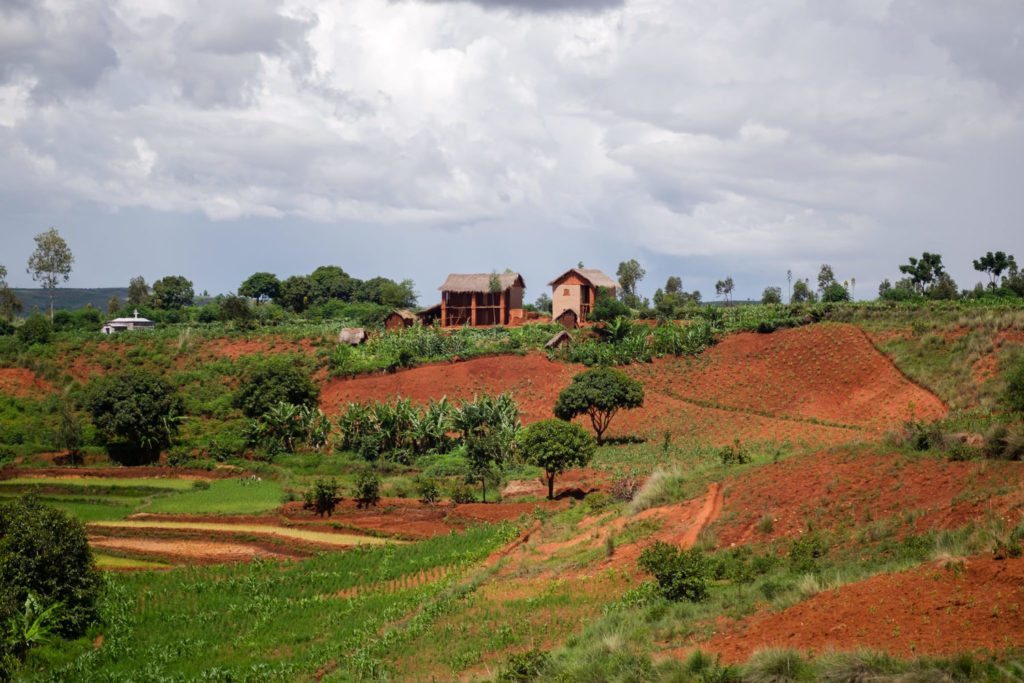 Soil red as blood and every possible shade of green springing forth from the ground with a vivacity for a life that fills you up inside. The plentiful rivers gushing with rust-red water spiral through the deep green valleys and small waterfalls spill from rice patty fields into quiet ponds that reflect the sky. 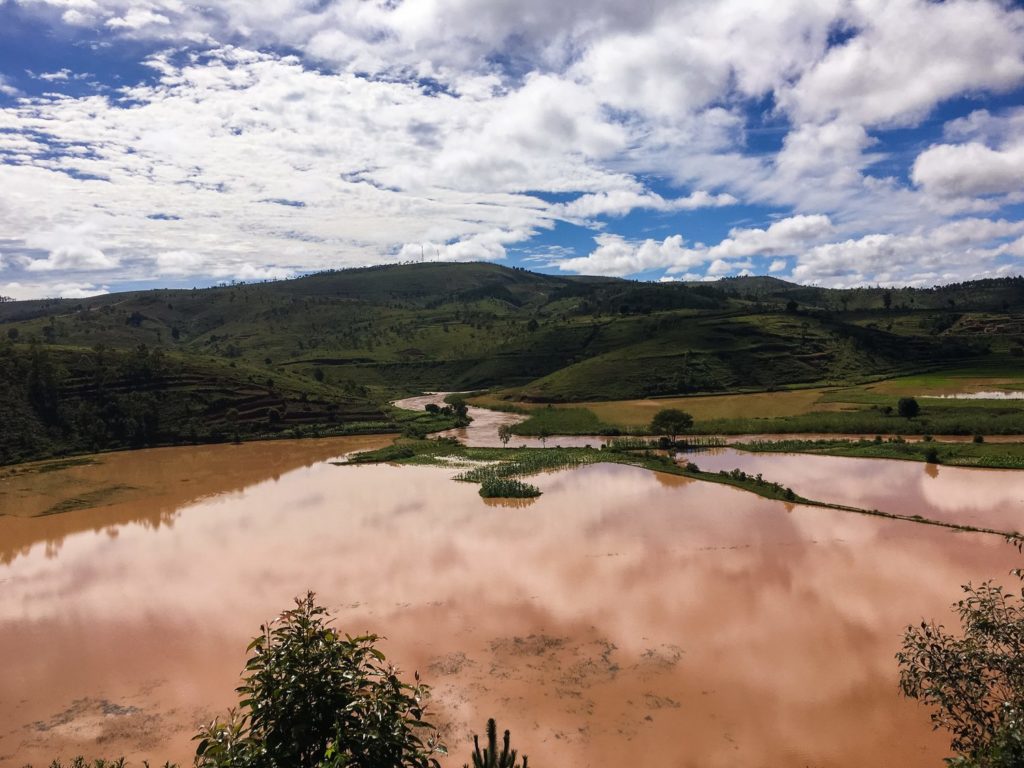 The tall homes built of the red soil and heated into bricks stand 3 stories tall with thatched roofs in small village clusters scattered among the rolling hills. Bright colorful flowers, vegetable gardens, fields of corn and rice spread out before our eyes. 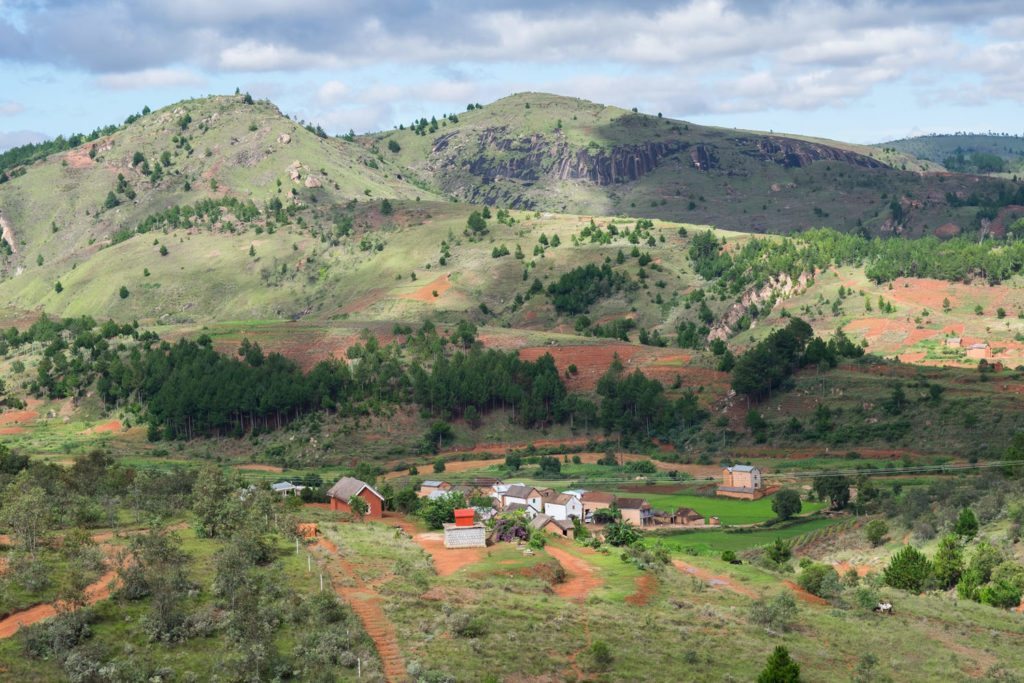 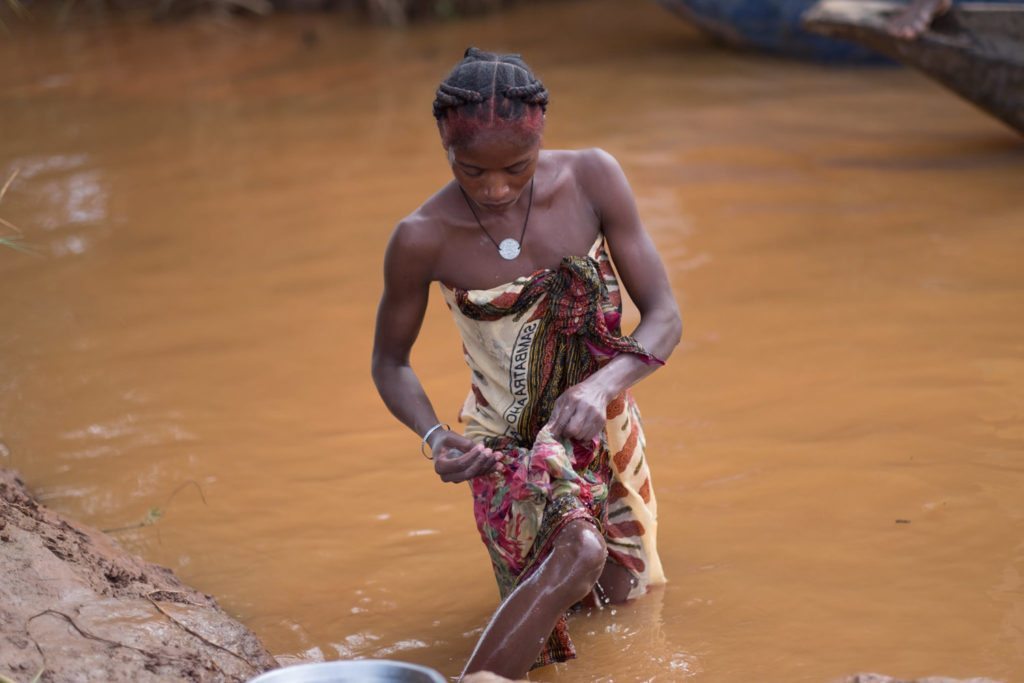 The majority of “traffic” on the roads is bicycles or zebu (cattle in Madagascar) driven carts, some of them loaded sky high with grass to make roofs, firewood or red clay bricks. The small markets in every village we travel through are packed with stalls displaying bright colored fruits, plates of tiny mushrooms, dark chunks of black coal, and stacks of varied vegetables piled in delicately balanced ‘display’ that you might find an art director creating for a food magazine. 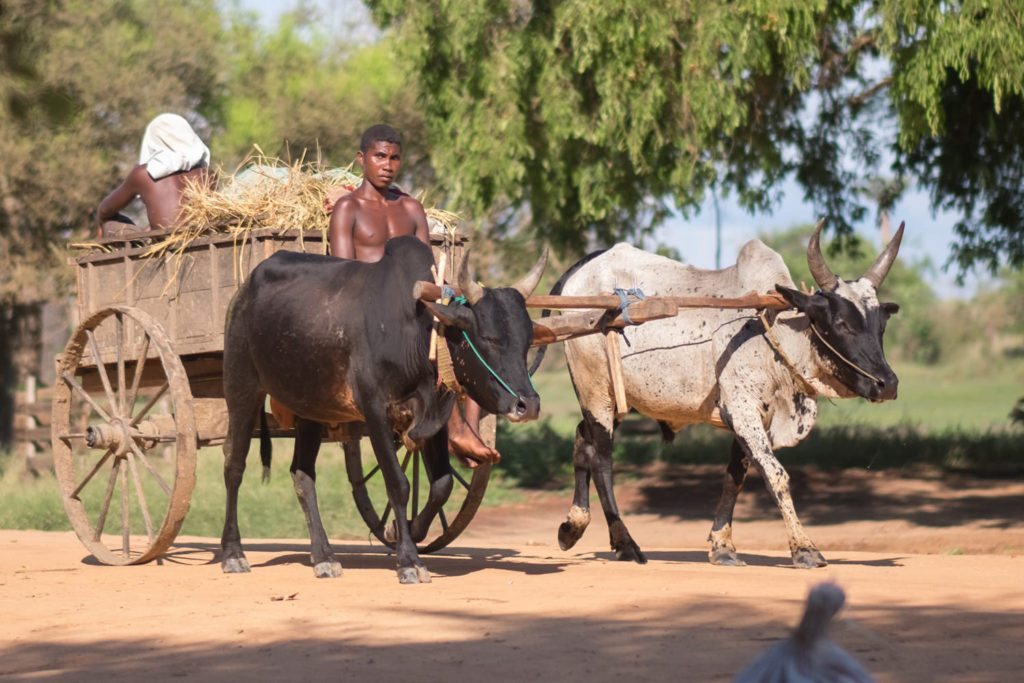 When we arrived at the Tsiribihina river, a long pirogue made out of a single tree trunk was waiting for us along with 6 boatmen who would accompany our river trip. The pirogue happened to be the largest one known on the river and we were glad to have secured it. All 8 of us, camping gear, bags of personal belongings, a stove and enough food to feed us all for three days (including a live chicken – when you don’t have refrigeration, you take your food still alive) packed into the canoe and off we went at an impressive speed that only very well practiced boatmen could have mustered. 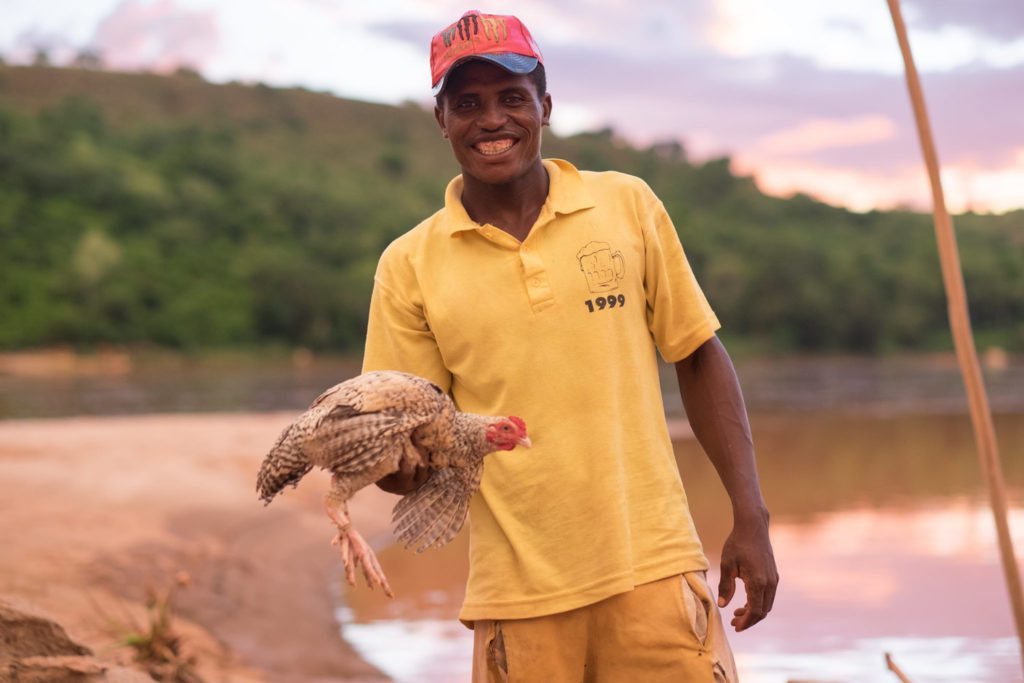 The sun burned bright from early on in the morning, even sunscreen, clothes and an umbrella couldn’t protect our skin from reddening. The boys took off their shirts and dipped them in the mirky water before putting them back on to cool themselves. If we could have seen beneath the surface of the water, I definitely would have jumped in and risked the crocodiles but the thick rust color blanketed every being underneath. 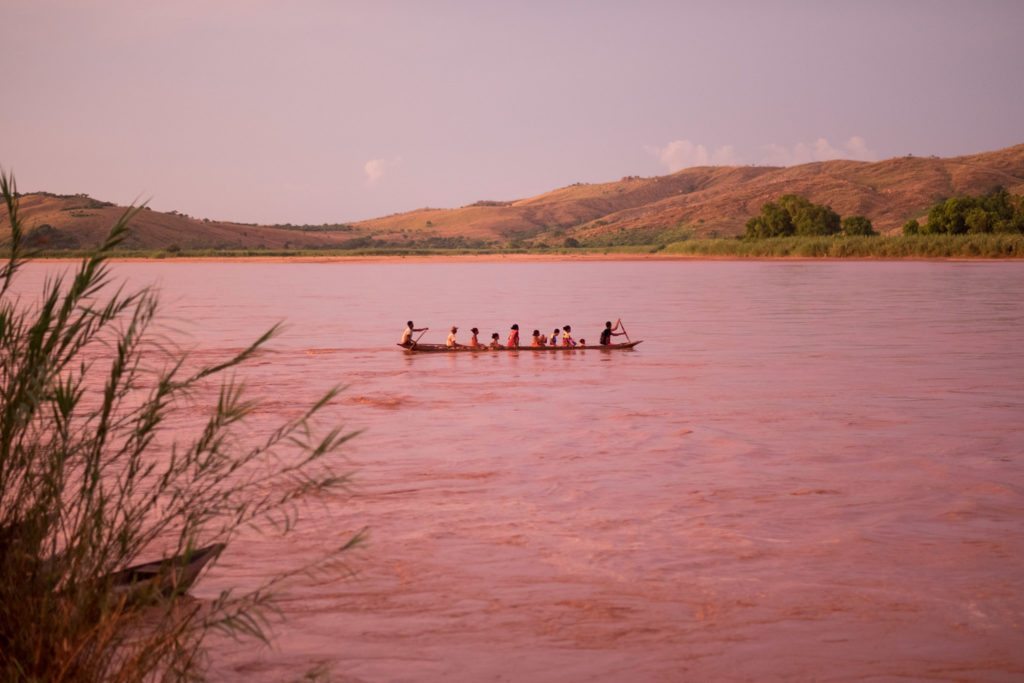 When plates of fresh salad followed by heaping bowls of rice and steak served with a delicious sauce were passed forward to us, we could barely comprehend the situation. Without us being aware, lunch had been cooked on a clay stove over a fire made right in the canoe that continued to hurtle down the river. We balanced our umbrellas and our plates of food as we coasted by small villages seated along the banks of the river.

When we reached a waterfall later that day, it was a brilliant relief to dunk under the raging falls. It was a gorgeous waterfall that spread out down the mountain, creating what looked like many little waterfalls that spilled into a shallow pool. We all took advantage of soaking in the cool water and shade of the jungle trees before climbing back into the boat where our belongings had been roasting in the sun.

The first night we camped on a wide open beach and watched a purple and pink sunset give way to a sky full of stars and that’s when the bugs started plummeting from God-knows-where and landing like hail all around us. Most of the bugs were these small dark beetles, others were large crickets, of course there were the mosquitoes, and other winged beings. We lost our appetites when our plates of food got infested with the bugs but stayed up talking, mesmerized by stories of Madagascar life. 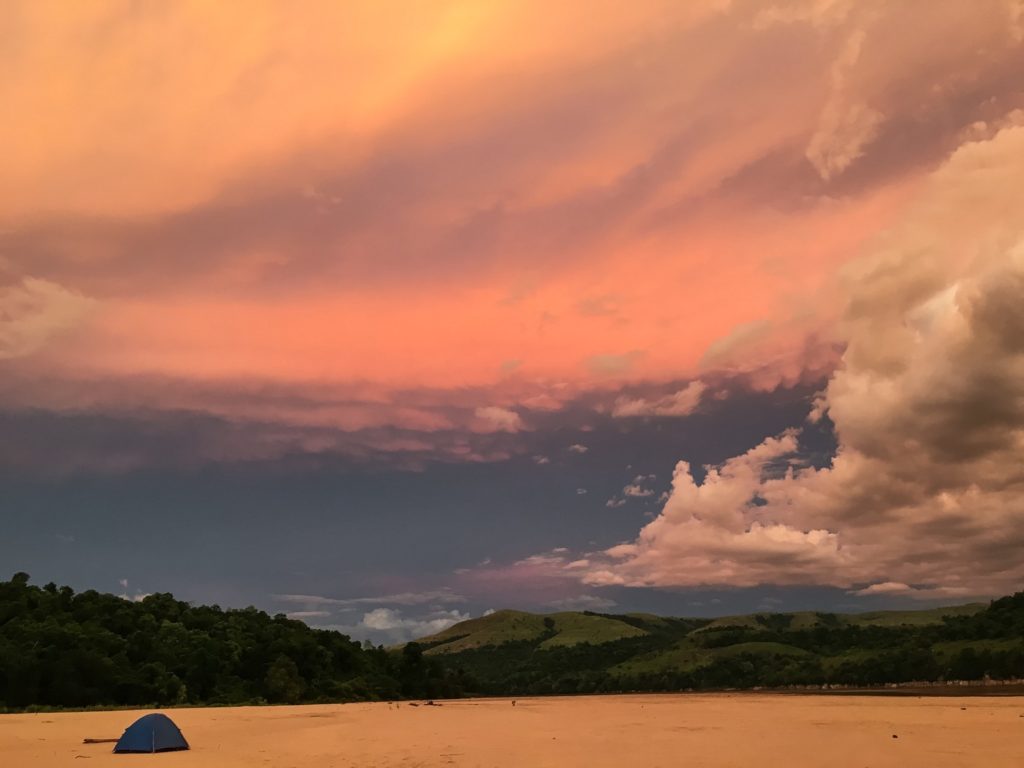 One boy’s life experience as a zebu thief was particularly fascinating.

Our tent that night was stifling hot, Michael decided to brave the bugs and try to sleep outside on the sand. He came back into the tent a few hours later and the heat from his body immediately soaked the stagnant air. We lay wide awake, it was hard to breathe it was so hot.

An hour later the weather made a drastic change and suddenly the wind started to whip around our tent. It was the greatest relief we could have wished for and we stuck our heads out and felt the wind on our faces. A few flashlight in guide’s tent turned on and next thing we knew, he was next to us zipping up our rain fly, saying the storm was coming. We were so reluctant to be zipped back into the stagnant air of the tent but as soon as the rain came pouring down in violent gusts we were happy to be safe and dry. The mosquitoes had snuck in while we had had the tent open and the buzzing noise was driving me insane. I went on a killing spree until I was sure I had gotten every single one. That’s when we finally fell asleep for the remaining hours of the night.

We continued our journey down the river after breakfast the next morning. Midday in the pirogue, the heat beat down so oppressively, I didn’t dare move, maybe because I was afraid that I’d find that my body simply was unable to or because moving at all might make me burn up from the inside out. Every once and a while a little breeze would pick up briefly and it was like taking your first breath of the day. The moment the sun slide behind a cloud, usually in late afternoon, we would sit up and look around, smiling at each other as if waking from a long winter slumber to find everyone had survived.

We stopped at a few villages situated along the Tsiribihina. The only way to reach these villages is by pirogue as no roads stretch to these parts. We receive one of two reactions from the children in these villages. Either they eagerly await our arrival on the river banks, grabbing our hands as soon as we step on shore, or they run away from us shrieking in fear. Although I expected the first reaction, I didn’t understand the second one until our guide told us that there is a common story believed by many villagers that white people steal young children. Michael and I tried to show these kids that we were not child thieves, smiling and waving enthusiastically but they just turned their heads away as more tears streamed down their faces. 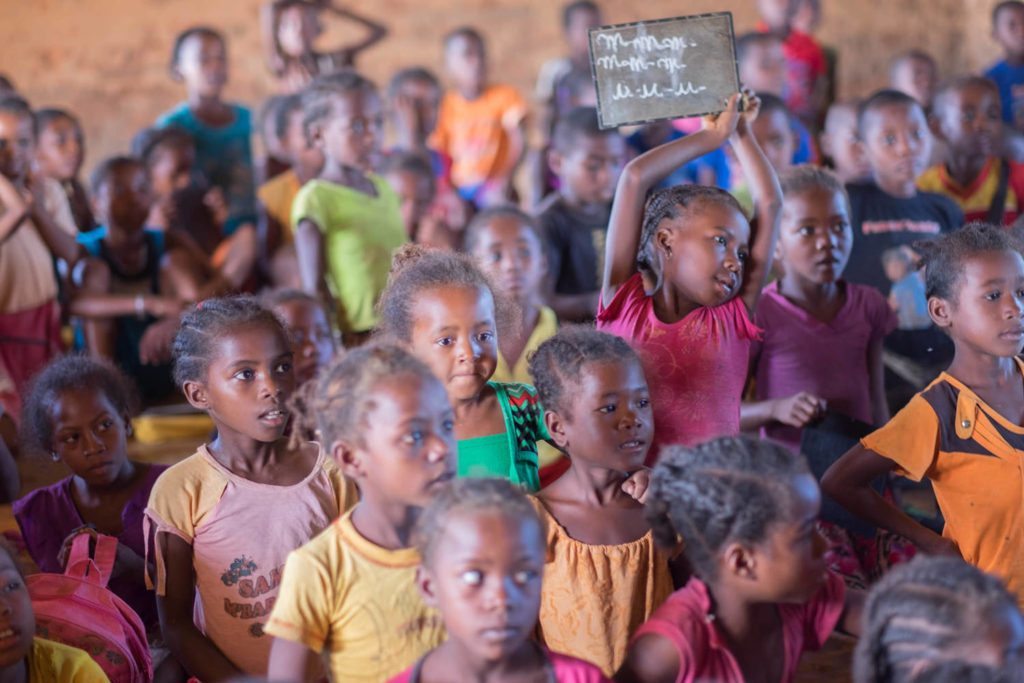 As we approached our next camp spot, our boatman called to people fishing along the shore to tell them we were coming and to invite the children of the villages to share a campfire that night.  Just as the sun was setting, the children trickled in to the river beach and our campsite. When the boy with a tiny handmade guitar arrived, another boy asked for one of our empty water bottles and beat the bottle against his hand and leg to play percussion to his friends guitar. Four by four, the kids started to dance. The lightning lit up the clouds like a strobe and the fire crackled bright gold sparks into the air. We could barely get our thoughts together to record some of the music and capture the magic of the scene on film.

The kilalaky dance is distinctly Malagasy and unique to the Bara people living in this particular part of western Madagascar but every village has its own take on it. Its controlled yet frantic, quick movements drive the dancers into a trance-like state.

At the end of our journey down the Tsiribihina we piled our bags into a rickety zebu cart which we would need to take inland to a village about an hour away where we would be able to get a 4×4 car. We were invited to sit on top our bags in the cart and the zebu lurched forward with all their might. At first I was sure the cart would fall apart in 100 pieces but as we plowed through deep muddy trails, stream beds, and over rocks that tilted the cart over onto one wheel and we were still in one piece, I knew this cart had probably been through much worse. 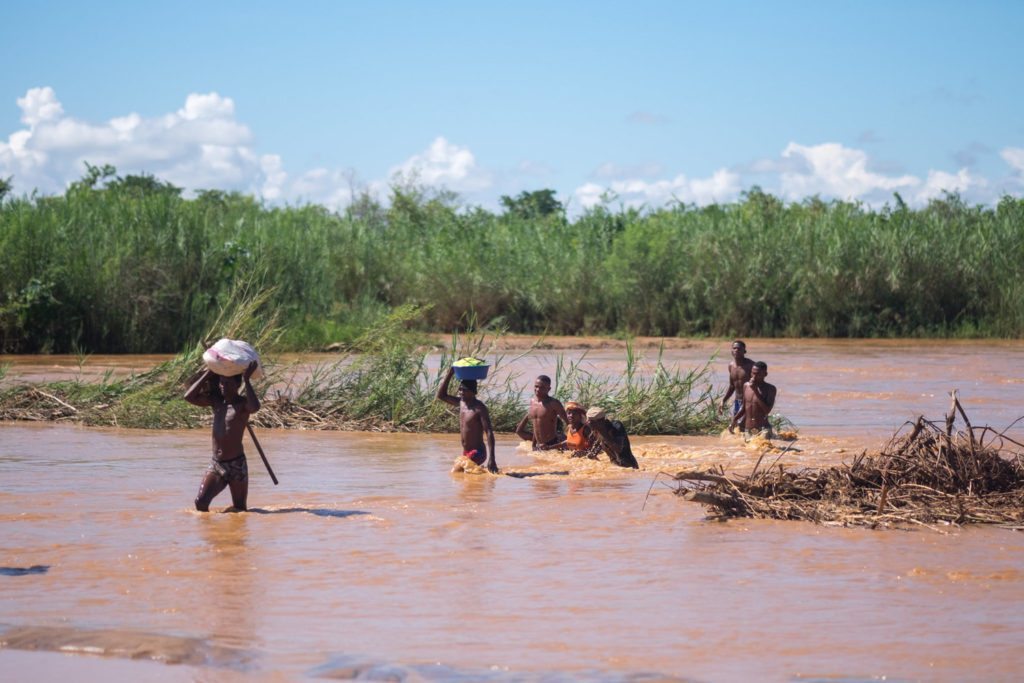 We pulled out our supply of trash bags (which we brought in expectation of the rainy season) and taped up our camera bag and personal gear bag as best we could. A few young strong boys were paid and hoisted our heavy backpacks on their heads. Michael and I held out breath as we watched the boy carrying the giant camera gear bag slip into the water up to his chin, the bag barely skimming the water. As he reached the other side we all cheered in relief. That was all our entire footage, hard drives, cameras, lenses, everything.

Getting ourselves across was just pure fun, we dug our feet into the muddy river floor to brace against the current, gripped each others hands and tried to hold the GoPro to capture the moment.