BEING | HERDING IN THE MAASAI MARA
500
post-template-default,single,single-post,postid-500,single-format-standard,ajax_fade,page_not_loaded,,qode-title-hidden,paspartu_enabled,qode_grid_1300,qode-content-sidebar-responsive,qode-child-theme-ver-1.0.0,qode-theme-ver-17.2,qode-theme-bridge,disabled_footer_bottom,wpb-js-composer js-comp-ver-5.6,vc_responsive

16 Feb HERDING IN THE MAASAI MARA

Posted at 21:38h in Uncategorized by Isabelle 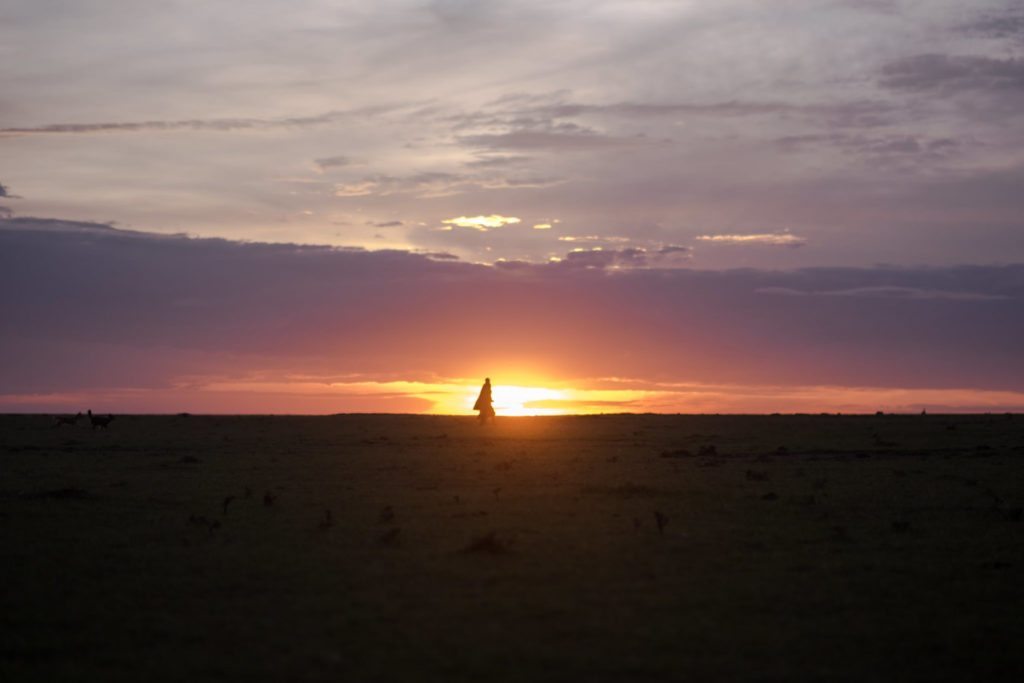 In this particular spot on the Maasai Mara, you can look in any direction and there is nothing around to obstruct your vision. The horizon meets the ground at a perfect 90 degree angle.

Large herds of cattle, goats and sheep graze peacefully as their shadows start to lengthen across the flat earth beneath their hooves. The crunching of the long grass, lazy baa of goat, effortless singsong whistle of the herders, and more and more birds songs fill our ears as they come to nest in the lone tree nearby. It’s impossible not to feel at ease in this moment however the approaching nightfall and occasional whooping sound of a hyena reminds us of what other animals share this land.

Alex has been herding his whole life in this place. His cattle are mixed together into one large herd with cattle from other families, identified only by each family’s signature brand mark seared into the flesh when the cattle are young.

When Alex was born, about 14 years ago, this land was already divided among the families as private property. But Alex’s father and grandfather reminisce how life was when they were semi-nomadic. His grandfather preferred the nomadic lifestyle to the forced stationary one he lives now. He recalls how he and other families would pick up and easily move to greener lands and available water sources with huge herds of animals, unrestricted by a specified land mass. Private ownership of land was a foreign concept. They adapted to whatever condition the environment was currently facing, whether there was a drought or terrible storms, they could always choose to be in the location best suited for their health and the health of their livestock.

But the younger herders know a different reality. In the 1960s-1990s, the Kenyan Government divided up the land into individual ranches. The Maasai were then unable to keep large herds if their portion of land could not support the number of animals and it restricted them from accessing critical water sources, pasture, and salt lick. Once a self-sufficient people, Maasai are now facing many social-economic and political challenges. Their herds are much smaller and the principles of herding are not dictated by the conditions of the land, but instead, the imposed laws of conservancies and National Park regulations.

Like many Maasai people, the families in this particular area rent their land to conservancies at an extremely low cost. The conservancies have the local land owners sign contracts (generally a finger print is sufficient when they are unable to sign their names) and the contacts are rarely fully understood by the signers. One of the restrictions imposed by conservancies is that the Maasai are not allowed to herd their animals on the land during the daytime when tourists are on safari. They are however, allowed to herd during the nights since it is well known that the best grass and water sources are in the land sections rented by the conservancies. So the boys take their animals to graze in the park lands as soon as night falls.

Unable to grow crops due to dangers of wild animals, the cattle are their “bank accounts” and their only resource. Just the night before we filmed, a few of their cattle had been attacked by lions. In the past, Maasai might have killed the lions that show aggression towards herds or people. Now, when their cattle are killed by lions within the conservancy areas, they receive a small payment from the conservancy. If the lions kill their cattle near their home (outside of the conservancy), then no payment is issued and they must deal with the loss.