BEING | CONVERSATION WITH A PEACE OFFICER
494
post-template-default,single,single-post,postid-494,single-format-standard,ajax_fade,page_not_loaded,,qode-title-hidden,paspartu_enabled,qode_grid_1300,qode-content-sidebar-responsive,qode-child-theme-ver-1.0.0,qode-theme-ver-17.2,qode-theme-bridge,disabled_footer_bottom,wpb-js-composer js-comp-ver-5.6,vc_responsive

21 Dec CONVERSATION WITH A PEACE OFFICER

Posted at 21:34h in Uncategorized by Isabelle 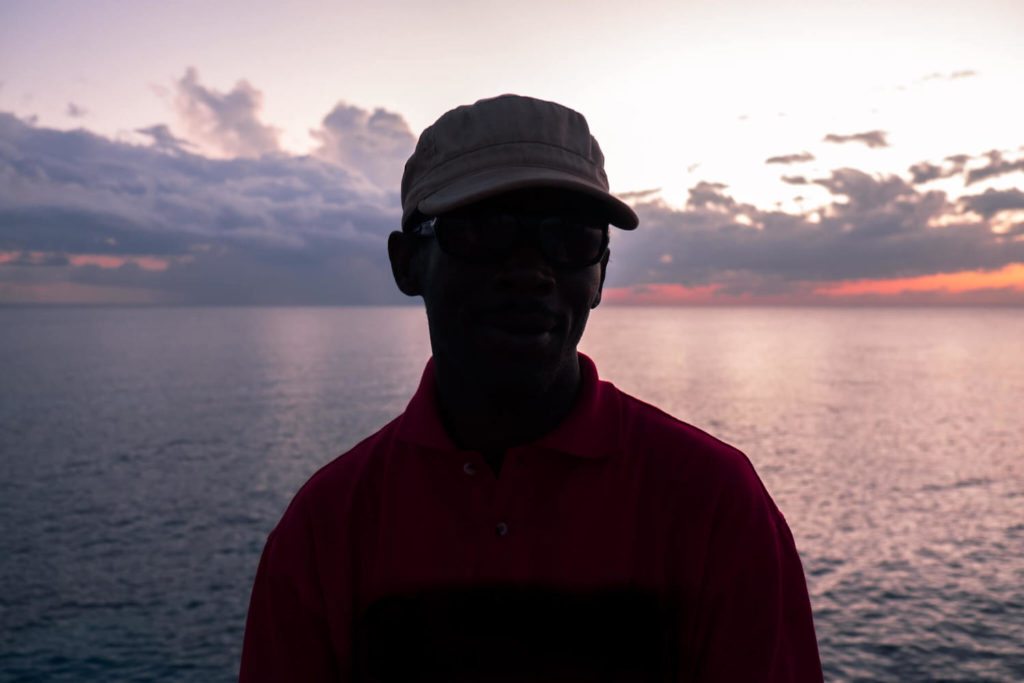 The sun has just dipped into the ocean and the reggae band begun their first jam when we noticed two men with “peace officers” printed on the backs of their shirts, exchange a few quick words before one of them ran off clutching a wooden baton. The other peace officer noticed us watching and he came to sit on the wall next to us overlooking the ocean. He told us that some guy who is notorious for “touching” had snuck into the bar and so his friend had gone to take care of the situation. I assumed he meant this guy was touchy with the ladies and nodded in understanding but he clarified that the man touches other people’s things. Their cameras, their wallets, in other words, he’s a thief.

We asked if he dealt with such situations frequently at this bar, the most popular bar in all of Jamaica, where tourists abound in masses to watch the epic sunsets, jump off cliffs into the blue waves, and drink overpriced beers. That was when he showed us the inside of his arm where a fresh gash had been crudely stitched together. He turned his head exposing another deep gash on the back of his neck, also still healing, and pointed to a few other places under his shirt indicating more wounds. Only few days earlier, Jonathan (the peace officer) had seen a guy grab one of the tourist’s cameras and he took off chasing after him. 6 other thieves subsequently jumped Jonathan and started stabbing him with sharp objects.

Someone had called the cops when the chase had commenced and even though police are rarely seen in Jamaica and no local person would ever rely on them for protection, they are always ready to respond to an incident at the popular tourist bar. The thugs were arrested and Jonathan sent to the hospital to get stitched up. He was back at work the next day after being unable to sleep due to his many wounds. He does not get time off to mend and if he didn’t show up at work, someone else would take his job. He made it very clear to us that he did not hold any resentment towards his employers.

He makes $10/day as a peace officer and sends his two kids to school, costing him $4/day for his son and $3 for his daughter. He admitted that working at the bar was extremely taxing but again said that he did not blame his employers. It’s the government’s fault, he said, that foreign employers are encouraged to create such working conditions in Jamaica.

He told us in a hushed voice that one young vacationer had recently hit his head while jumping off the cliffs into the water and died. He told us we wouldn’t find this in the news. The tourism industry is the most powerful and protected industry in all of the Caribbean. We had already known this since we had heard of violent incidents from local Jamaicans but could find no reports online. All the workers at this popular bar were told not to speak of the young mans death. They were told to say they knew nothing about it or to say that they were not working on that day. A few people had already been fired for talking about it.

He went on to tell us the same story that we heard all over Jamaica. The only way to make a decent life for one’s family was to leave the island and work in the U.S. and send money back home. He had seen many friends take opportunities in the U.S. and although he envied them, he also loathed the way it seemed to change his friends when they returned for short periods to be with their families. They leave on a plane and come back with changed eyes, he said. They won’t even slow down to say hi once they are able to buy a car. It’s like they forgot that they all grew up together on the same streets.

The reggae band was in full motion, sunburned dancers rocked back and forth on the dance floor, and the mosquitoes started their nightly feasting. We asked to take his portrait and Jonathan took a thoughtful pause before making sure we would not give out his full identity when sharing his story. He made sure to declare how grateful he was for his job and happy that he did not have to resort to desperate measure like those he was hired to watch out for.

He also mentioned, with a flash of a smile, that he was pretty good at his job too. He had indeed fulfilled his responsibilities, retrieved that stolen camera and returned it to the rightful owner. The scars were just part of the job.